“The Weather of the Future” and “Climate War” 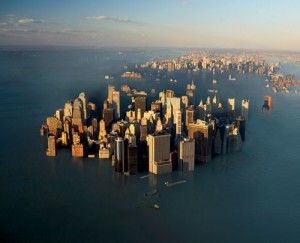 The New York Times reviewed two books about climate change yesterday,  “The Climate War,” by Eric Pooley, and  “The Weather of the Future,” by Heidi Cullen. “The Climate War” tells to story of the unsuccessful political battles to get Congress to tackle climate change, while  “The Weather of the Future” makes predictions about future extreme weather events based on computer model predictions of the Earth’s changing climate.

These are two interesting and timely books, and their juxtaposition points to the fundamental challenge facing any legislated response to climate change.  The main US environmental regulatory statutes were all enacted in response to specific, tangible environmental crises – the Clean Water Act responded to waters so polluted that they literally caught on fire; the Clean Air Act responded to visible, choking levels of smog in US cities; and the Superfund and RCRA hazardous waste cleanup and regulations schemes were enacted in response to contaminated sites such as Love Canal in Buffalo, New York and the town of Times Beach, Missouri.  In these cases, the environmental crisis was evident to the casual observer and their causes were beyond political dispute.  It is much harder to find aggressive regulatory schemes adopted in anticipation of an environmental crisis that was forecast, but that had yet to occur – the one instance that comes to mind is the banning of chloroflourocarbons under the Montreal Protocol.

The story told by “The Climate War” makes clear how much more difficult global warming is as a matter for legislative action than the 1970s environmental problems.  The global warming crisis has yet to strike in a tangible way (this summer’s Eastern heat wave notwithstanding), and the causes of any specific weather phenomenom experienced by the voting public are always debatable.  Climate scientists are careful not to attribute any particular weather event – whether a heat wave or even hurricane Katrina – to global warming.  While there is near complete scientific consensus that global warming is happening and is human caused, the ambiguity about whether any particular extreme weather experienced in the United States can be attributed to global warming leaves room for a political debate – or a “Climate War” as Pooley puts it.

“The Climate War” ends with the stalemate in Copenhagen in 2009, but the Senate majority leadership’s decision last week to take climate legislation off the agenda is a telling coda.  The elements are not yet in place for aggressive action to address climate change: legislation tends to react to tangible crises, and climate change is not yet a tangible crisis with an unambiguous cause.

Heidi Cullen’s book predicts the kind of extreme weather events that should provoke a legislative response commensurate with the kinds of environmental crises that led to the Clean Air Act, Clean Water Act, and Superfund.  The problem is, by the time these events occur and can be unambiguously attributed to global warming, the time for a legislative response will have come and gone.