Sounding the Alarm in the Gulf of Mexico 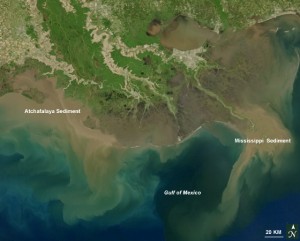 President Obama signed an Executive Order in 2010 directed at ensuring responsible, coordinated ocean management by federal agencies. Stressing the importance of the Nation’s oceans for human health, economic and environmental sustainability, and climate change adaptation, the Order created the National Ocean Council, an interagency committee charged with effectuating the National Ocean Policy. This policy is continuing to develop but aims first and foremost to “[p]rotect, maintain, and restore the health and biological diversity of ocean…ecosystems and resources.” Such a lofty objective may seem impossibly idealistic—especially when we have yet to achieve the Clean Water Act’s goal of eliminating the discharge of pollutants into navigable waters by 1985.  It is nonetheless an encouraging sign from the federal government of its dedication to ocean health and sustainable resource management.  But that dedication must be converted to action, and the Gulf of Mexico is a prime candidate for such action.  It continues to endure severe environmental degradation with few indications of improvement.

With the Gulf still reeling from the BP oil spill over a year later, scientists are growing increasingly concerned about evidence which suggests much longer-term harms to the affected ecosystems. Dolphins, many of them babies, are washing up dead in record numbers all along the Gulf, with hundreds of endangered sea turtles, thousands of birds, and countless fish meeting the same depressing end. Fish are turning up with skin lesions, fin rot, liver blood clots, and other adverse health problems. While a substantial portion of the oil was supposed to have been broken down by bacteria, this has apparently increased the occurrence of eutrophication, a severe problem in the Gulf attributed mainly to corn-belt industrial farming practices. Runoff pollution is only expected to intensify after unprecedented flooding of the Mississippi. And while the Gulf experiences about 4,000 oil spills per year, Congress seems immune to the idea of stricter environmental and safety controls for offshore oil drilling. Following the passage in the House of offshore drilling legislation, the Senate is poised to vote on its own version shortly—bills that in the words of one commentator take “the same reckless approach to approving new drilling while limiting environmental and safety reviews of lease sales and drilling permits.”

So how does the Obama administration plan to translate its inspiring vision of ocean protection into reality? How do we, as a society, reconcile our debilitating need for oil with the strategies and initiatives necessary to save our threatened oceans?  The legal mechanisms already in place seem poorly equipped to deal with a problem that has negative inputs from so many different complex and critical sources. Yet Congress duly appears incapable of passing meaningful legislation with a responsible, compromising approach to ocean management. Hopefully, the coming Blue Vision Summit (May 20-23 in D.C.), followed by the National Coastal and Marine Spatial Planning (CMSP) Workshop (June 21-23 in D.C.), will yield potential and innovative ways forward.

Professor Ann Powers is a faculty member of the Center for Environmental Legal Studies, where she teaches a range of environmental courses focusing on the law of oceans & coasts, international environmental law, UN diplomacy and water quality.