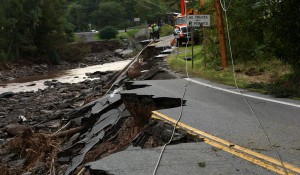 Flooding in the Catskills in September, 2011

The news coverage of the damage wrought by tropical storms Irene and Lee describes the perfect storm caused by a rapidly changing physical, financial, and political environment.

Recent flooding is only the latest convincing evidence for us laymen that the overwhelming majority of respected scientists are right about climate change.

These storms call for a revision of current 100-year storm models. Serious floods happen often in the Northeast, largely due to decisions we have made about where and how people live. The problem goes beyond the decisions of owners to locate homes and businesses near streams and rivers and of local zoning regulations and boards to accommodate them there.

Climate change is caused by the accumulation of Greenhouse Gases (GHG) in the atmosphere that let the sunlight through, but block heat from escaping. This causes the planet to warm and weather conditions to change, exacerbating the frequency and ferocity of storms and flooding. Eighty-five percent of GHG is carbon dioxide, which is emitted from electrical generation plants, buildings, and automobile tailpipes.

Various aspects of our modern lives intensify the effects of climate change. Up to three quarters of the energy used to produce electricity is lost as escaped heat at the point of generation, in transmission to the point of use, or because of energy-inefficient home sizes and building construction. Our single family homes use disproportionate amounts of energy and waste much of it, while suburban families can travel to and from home to somewhere else up to 15 times a day. Vehicle miles traveled have increased at three times the rate of population increase due to the spread out pattern of development in the U.S.

On the political front, things are equally stormy.  According to ascendant political views, we must reduce the size and functions of government, get regulations off the backs of businesses, live with 2% local property tax increases, and leave local officials in charge of land use decisions. Yet without new building regulations, funding for flood prevention and infrastructure, and awareness of the regional nature of our problems, including flooding, we are sunk. For the first time, many resilient American families seem to be aware that they cannot simply continue to rebuild and expect government support in the process.  Current news coverage is full of the resultant despair.

The worst may be yet to come. The Census Bureau reports that the population will increase by 100 million by mid-century, which will require millions of new homes and billions of square feet of non-residential development. To the extent that this development on the land replicates the pattern of the past, GHG will continue to skyrocket, the climate will continue to warm, and storms will become even worse. The solutions are clear. Local land use officials have to adopt regulations that ensure on-site retention of stormwater.  Flood plains and areas subject to sea level rise and storm surges have to become off-limits for any serious development.  Development in general has to become more cost, energy, and environmentally efficient.

This can be done by emphasizing compact, mixed-use development in cities and urban nodes where vehicle trips are fewer, buildings are more thermally efficient, and supportive infrastructure is more cost effective. Seeming counter-intuitive, this is a market-driven strategy. We have a 15-year supply of existing single family homes and the new population consists largely of urban-oriented, smaller households. Urban real estate prices are healthier than prices in suburban and exurban areas as a result. The market needs revitalized cities, retrofitted suburbs, and hamlet-style development in the country-side.  This new development needs to be located and equipped for future climatic conditions and operated to reduce per capita water usage, impervious coverage, stormwater runoff, CO2 emissions, and energy consumption.

At the Pace University School of Law, through the work of the Land Use Law Center, we are highlighting countless examples of local governments developing sustainable plans, incentives, and regulations, guided by intelligent state and federal policies that accomplish these results.  These efforts progress despite appeals for less government regulation and spending because they respond to real local problems that cannot be ignored.  Such efforts are not designed to respond to the most recent voter opinion poll.  They are clear-headed, market-realistic, and serious strategies that accord with the greatest American ethic of all: that of being problem solvers in the face of crisis.