Federal and state policies should encourage localities that contain neighborhoods with the potential for district energy systems and transit oriented development to rezone these areas as Energy Conservation Districts calibrated to achieve multiple objectives of sustainable development.  This they should do with the support of the state and federal government.  In the orchard of energy conservation and climate change mitigation techniques, this strategy may be the lowest hanging fruit. 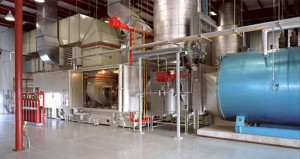 Over 70% of electricity produced in the U.S. is consumed by buildings, which also account for over 40% of total domestic energy consumption.  Building construction can be made more efficient by enacting, enhancing, and enforcing energy construction codes at the local level and by zoning that creates thermally-efficient, compact, mixed-use neighborhoods. According to the Pace Energy and Climate Center, as much as 80% of the energy used to produce electricity in remote plants is wasted at the point of generation and additional loss occurs during transmission.  This waste is largely eliminated by on-site generation in district energy systems, which can be prohibited or permitted by local land use regulations.

Transportation accounts for a third of domestic greenhouse gas emissions and well over half of that is traceable to personal vehicles that are used to traverse the sprawling settlement pattern that is the result of prevailing land use policies.  Vehicle miles traveled (VMTs) and the emissions caused by the use of personal vehicles can be reduced by up to 90% through transit oriented development and other strategies for reshaping human settlements through local land use plans and regulatory provisions.

Domestic energy use in buildings correlates with climate change: over 35% of CO2e emissions, nearly 2.5 gigatons, are attributable to energy consumed in buildings.  Per capita energy consumption and greenhouse gas emissions are more than twice as high in low density developments when compared to the higher density neighborhoods that local Energy Conservation Districts create.

Encouraging and supporting local governments interested in such reforms should be a principal state and federal priority.  Local officials must learn how to determine what types of buildings and energy uses need to be included in such a zoning district and how to change land use regulations to facilitate district energy systems, more energy efficient construction, renewable energy facilities, transit-oriented development, and achieve other sustainability objectives.  State and federal support for an Energy Conservation District program can unlock the potential these strategies have for energy conservation and climate change mitigation.

The framework for creating a partnership among federal, state, and local agencies leading to Energy Conservation Districts is discussed here.