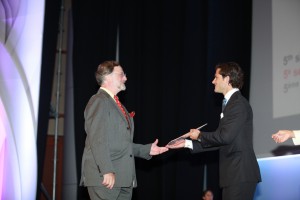 On Wednesday, Professor Nicholas Robinson received one of the IUCN’s highest honors, Honorary Lifetime Membership status.  The full Pace delegation was on hand, as well as hundreds of IUCN members.  The following is a press release from IUCN:

US citizen Professor Nicholas Robinson’s international environmental career spans five decades. He founded the Environmental Law programmes at Pace University School of Law and has served on the boards of organizations dedicated to environmental law and sustainable development.

He was Deputy Commissioner and General Counsel of the Department of Environmental Conservation of the State of New York, and for nearly 20 years served on US delegations to Environmental Law bilateral negotiations with the USSR (1974-1992).

He has been a member of IUCN’s Commission on Environmental Law (CEL) since 1972 and served as Chair from 1996 to 2004. From 1993 to 1996, he was Chair of the Legal Drafting Group for the IUCN Statutes Review Committee, and led the drafting of the revised IUCN Statutes and Regulations. He founded the IUCN Academy of Environmental Law and served as its Chair from 2004 to 2007. Since 1996, he has been organizing symposia and capacity-building programmes for judges on implementing environmental law.

One of his most outstanding achievements was the successful campaign to secure official Observer status for IUCN at the UN General Assembly, making it the first and only environmental organization to send an Observer delegation to the UN. He dedicated 2 years of near full-time voluntary work to this effort. It has made a unique and invaluable material contribution to the success of IUCN in all regions and globally through the UN system .