For those of you interested in the UN’s process for establishing Sustainable Development Goals as mandated by Rio+20, the Open Working Group approved its  “Outcome Document” on Saturday after a final week-long session.   It will be taken up by the General Assembly in the fall.

There are separate goals on water, energy, climate, oceans and terrestrial ecosystems.   The document was drafted by the co-chairs of the Working Group, with input from states, NGOs, IGOs and other stakeholders through many meetings and iterations.   Scores of states were active participants throughout the process and the galleries were often packed with civil society representatives.  If you have ever tried to draft a document in a committee, then imagine it multiplied by orders of magnitude.  It was often painful to watch, often boring, but the final document reflects a global general consensus of what must be done post 2015.  There are still contentious items, such as climate and some of the implementation issues, and the General Assembly may make changes, but just getting this far should be counted as an achievement. 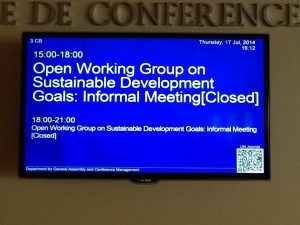